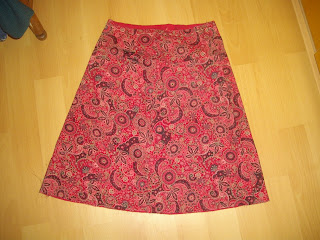 Sewing for Pelle isn’t always easy, and sometimes it’s stretching my skills. But after all the effort and time I’m getting more and more relaxed and confident. And I took a major step. Being raised in a very old-fashioned way, I always traced the patterns with a double thread. That took a long time, not only the tracing itself, but also pulling out the tiny threads when I did my official sewing. They got stuck and I had to pull hard, sometimes, using a pincer. After reading so many blogs about people sewing I thought I was about the last person on earth still using this technique. So I just let it go, for Pelle’s clothes. I’m joining the forces and will cut with 1 cm seam allowance. Because frankly, I won’t make muslins for him or do any major adjustments during the process. If it doesn’t fit him, I just make something new.
And now it’s time to take another step. Sewing for myself. I tried it last year, and the result was disastrous. I threw the skirt and pants I made in the waist bin. The patterns, the fabric, the shape off the clothes, everything worked against me building my own wardrobe. 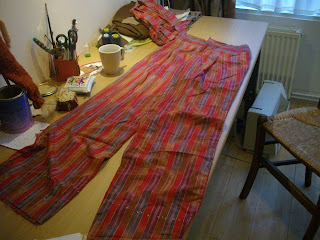 But I want to try again. It would be so good to have a few good patterns to rely upon. So I have another go at a simple skirt. Deciding for something that I think will fit my slightly peary shape. Yes, I admit, ladies, I am a pear. Small in the waist (size 38), bigger on the hips (size 40). No gatherings at the hips anymore (which make them stick out like a huge mountain slope), but a decent Eiffel tower. First impressions are good, very good. Encouraging.
So it’s onto the zipper now and the lining next. The final touches will be made with assistance of my sewing teacher. I already have visions of hunderds of skirts to follow. The fabrics I have! So appealing! And no being dependent upon stores! Ohh, that freedom.
To be continued.
Gepost door Ria op 21:37