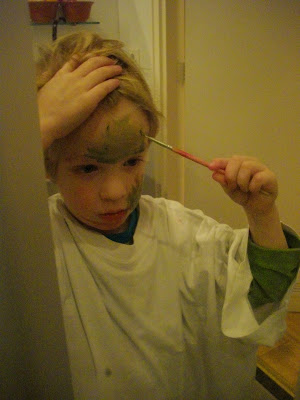 In front of the mirror.

Finally, I am writing this post about Pelle and his progress. Sorry it took so long. There are a couple of reasons for that, one of which is that I started to write in Dutch about the SonRise program. And I love doing that. I have a mission, being to popularize the Dutch version of SonRise. But I also feel like a true writer, who loves making little stories of each post. But it takes time. And as the program itself is growing it also takes more time to organize. We now have two people coming over every week, Christa and Lila. Christa is a student doing part of her apprenticeship here at our home and Lila I’ve hired myself. I give them feedback, raise funds to pay for Lila, talk to school about SonRise and what we do at home (they are very interested, because Pelle’s progressing so much) and next week we have our first meeting with everyone who is involved. Sometimes it feels like I have another career, similar to what I’ve done as a teacher and trainer, but also as a manager. And it’s benefiting Pelle so well.
Our goals for this moment are to learn him how to play. And it’s paying of very well. He is now able to do some pretend play, role-playing and a little game. We played a bit of memory the other day (16 cards), and that was a first. He’s stretching his imagination. He has a new pet, a tiger, which I once bought years ago and was totally neglected until a few weeks ago. They now sleep together and Pelle’s starting to fantasize about Tiger being ill and having a fever. He’s starting to interact with his classmates. He’s starting to read and taking up his interest in books again. He’s not asking the same questions over and over again anymore but in stead is being more active with his trains, Loco (a game used at school to stimulate cognitive development), puzzles and skeelers. He’s not a normal 5-years old, and maybe he never will be normal. I really don’t mind. He’s my very special kid. And he’s able to learn so much. I’m so proud of him.
Gepost door Ria op 23:16 2 opmerkingen:

Dear people,
If only I had more time, I would write more often. For now, I just leave you with some pictures of a T-shirt I sewed this week. I loved making it and intend to upgrade the pattern one size and also make a velours sweater, since Pelle loves wearing those in spring. 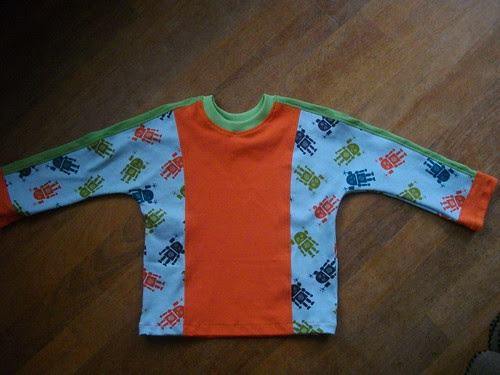 I love the way this turned out. When I saw the pattern in the Ottobre magazine, I knew I had just the right fabric for it.
I was a bit worried that the sleeves would be too wide under the armpits, but the fit is just fine for my 5-years old boy. 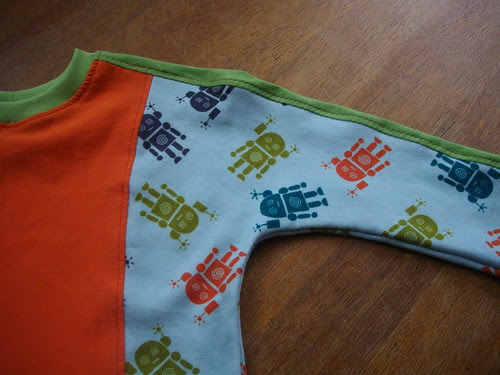