Inspired by this tutorial on the net about making bibs with sleeves, I decided it would be a nice gift to the mother of a boy and girl twin, who were born in September. Because our internet connection is failing during the day (have to look into that) I drafted a pattern myself, using an old bib of Pelle. But it turned out way to large.
So I borrowed a bib from a friend and drafted another pattern. After lining it I decided that was not a good idea, because the bib became way to bulky. My mother (who came to visit) removed the lining, and I bought bias bind yesterday. I borrowed a special biasbindfoot for the Pfaff, but struggled again. The fabric of the towel was too big for the instrument. So I screwed on my regular foot again and did my best. Biasbind and Oddwise don’t go together very well (hence the idea of lining the bib). But I came there in the end, had to do some extra stitching by hand to correct some mistakes and then that part was finished. I added a boyapplique and Velcro and was done in, what shall we say, 3 hours? And then there was another one to be made… But of course that one was easier. And now I know that the best way for me to use that bind is to stitch it twice. First onto the fabric, then folding it over, and then attaching it to the other side. Because then I know it’s secured well onto the fabric and not just to itself, leaving a gap at the border.

Now that they are finished I feel content and am really pleased with the result. I hope the mother is, too. I will sure make them again, as the occasion arises. 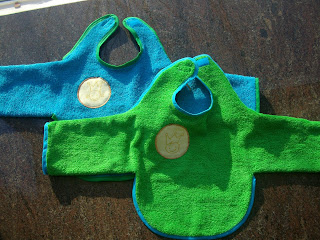 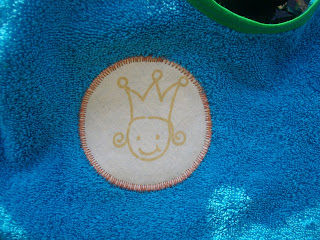 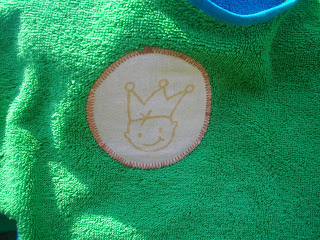 The appliqués are just pieces of fabric I once bought for the crib. Since I used something else I have way to much left (3 meters). So if you’re interested, just leave a remark and I can sent you a fat quarter or more for free. You only have to pay for the postage. It’s a pale yellow cotton from the Duimelot Cottage collection. 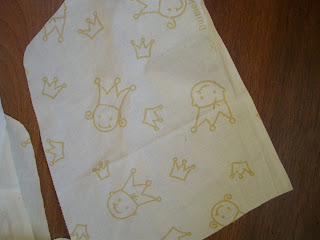