Like I mentioned in my former post, I did something different in sewingclass last Tuesday. Since the days are rapidly getting colder here, I felt commited to finish of a cap laying around since one of the hottest days this year (in August).

The story below is a copy of the one I wrote on Flickr. 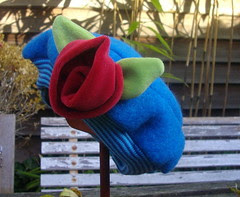 girlscap with rose
Originally uploaded by oddwise
For the first time since I've been sewing Ottobre patterns, (for 4 years now) I've made something for a girl!
And I have to admit: it was a joy.
The 10-years old sister of a playmate of Pelle choose the item herself and helped with tracing and cutting.
I'm a bit worried about the fit, hope it's big enough for her. 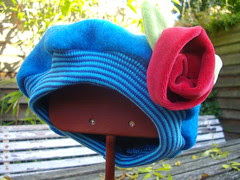 girlscap with rose
Originally uploaded by oddwise
In Dutch we call this a baret, maybe a beret is a good English translation? (My Ottobre mag is also in Dutch, so I'm not so familiar with all the terms).
I made it from a thicker woolfelt, (a popular fabric for coats and jackets here in Holland, for over a few years now). The border is a ribknit which I also use for shirt for Pelle.
The lining is a blue cotton, and the rose is from velours.
Gepost door Ria op 10:42 3 opmerkingen:

This weekend I started sewing on a T, in between visiting the fire brigade, going to the woods, seeing a DVD (the gripping ‘The Divingbell and the Butterfly” ) and hearing a choir sing Bach Cantates in our local church. And yes, I know, there’s the blue pant barely starting to come together, but I just couldn’t resist the striped fabric I bought at the Stoffenspectakel.

It said nautical to me and I contemplated on adding a pirate or a lighthouse but decided to go for a whale. Because I can still appliqué animals now, and maybe next year that’s already to childish, whereas the other themes are more age-proof and I can still use them when he’s older.
I can’t draw but the internet is willing, so I found an image there, from a colourbook. 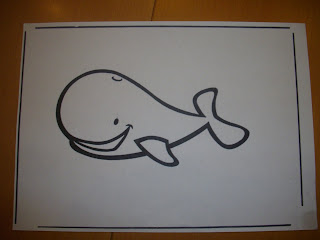 I started experimenting with the appliqué. 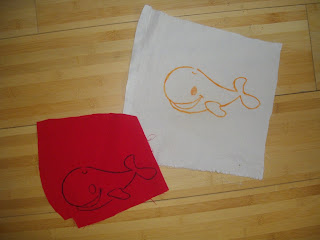 No, no orange this time but something red. A red whale then? No, to much

But a red border, that’s nice. And a fountain, gives it a bit more zest. 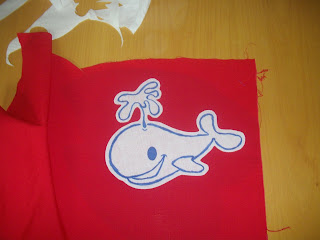 Hey, and if I also appliqué the fountain, it will stand out more.
And adding the fountain to the sleeve, won’t that be a nice accent? 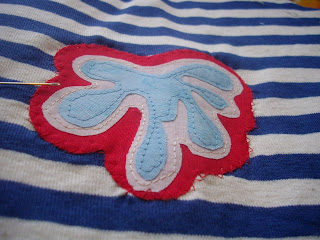 And of course, there should be a red binding and I can make a finishing touch by adding a red honeycomb stitch to the yoke.

So here’s the result (have to secure the binding on the collar, but had to go this afternoon, and took a quick photo while it was still daylight). 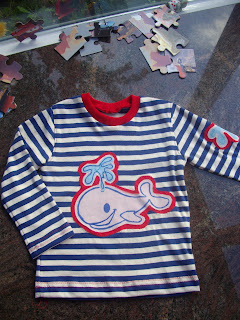 Yesterday evening, I sewed on one pocket to the back of the blue pant I am making for Pelle.
Because it’s my own ‘design’, I have to do a lot of judging. The size of the pockets (not to small, having to be in accordance with the pocket flaps), where to put them (not to low on the hips, not to close to the middle seam), comparing them with pants I made earlier on, but who are not exacly the same.
But it went well, and I’m happy, for now. I hope it stays that way when the whole pant comes together. 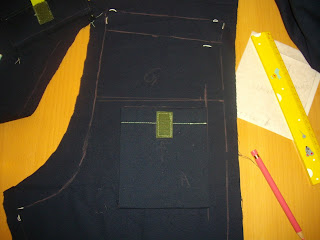 lining out the pocket 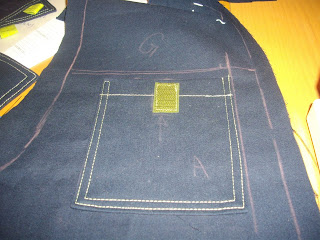 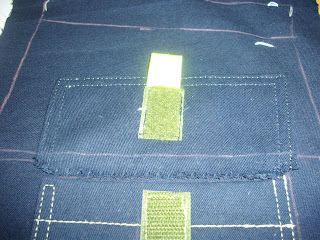 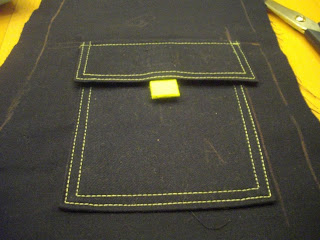 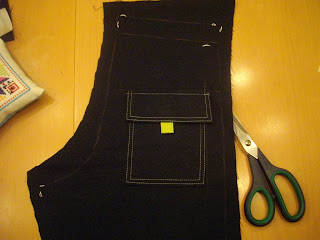 So now onto the other pocket. But first a colour accent: as you can see I added a green square.
Hope that turns out the way I envisioned it. 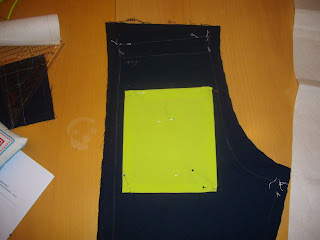 There'll be no more sewing tonight, have to go to meditation class, but I'll keep you posted on the progress. (Hope you like it).
Gepost door Ria op 10:39 1 opmerking: 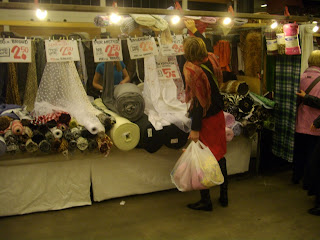 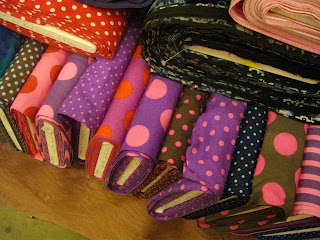 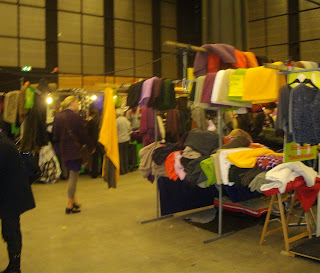 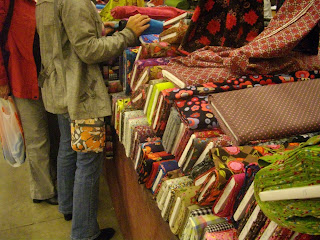 Today I went to a giant indoor fabric market, called stoffenspektakel. It's twice a year, in the fall and spring, in Groningen, our major city (and everywhere else throughout Holland, a part of Germany and Belgium).
I have to confess that I am not a happy shopper. I really, really don't like shopping. Because I get overwhelmed with all the choices and in regards to clothes for me, it's always a disappointment. Because I go into town with the purpose of buying a purple T, and then that colour is not in fashion. I try several stores, and end up grumpy and tired. And when I finaly find something that's good colourwise the fit is awfull, or my size (38, a very normal size) is not available anymore.
It's been years since I bought something simple like a pair of jeans. Because I don't like the low waist fit and it's very hard to get something else.
That's why I hate fashion. Because it's so often not my taste and there's so little room for anything else in the stores, or I don't have the stamina to walk in and out of shops for more than 2 hours. So when I need something new, it's always a struggle, and hardy ever a joy.
With fabrics it's slightly different, though. Because after 3 years of sewing I pretty much know what I want for Pelle and where I can find it. I'm just more focussed now. And it's really a joy for me when I find something suitable for boys. Very slowly I'm starting to look around for something nice for myself too. So what I bought today is a purple flowery knit for a T-shirt for myself (a Stenzo-fabric), a stripy knit for a T for Pelle, and an orange knit to go with an ooga-booga fabric I bought in the States. The curtain fabrics will be a bag someday. Because we have a Cars addict living here in the house. 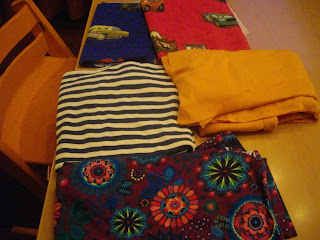 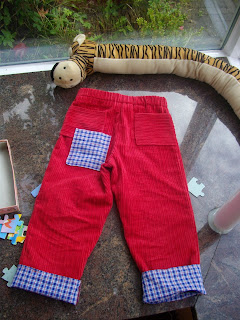 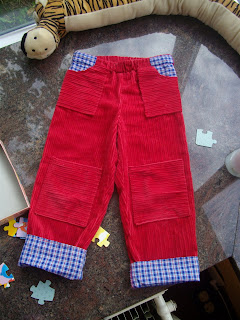 A few month ago, when the weather was just like today (cold and rainy), I made Pelle a red corduroy pant, already for this upcoming season. But in the process something went horribly wrong: it came out plain ugly. I already had my doubts while constructing it, but nevertheless moved on. But the pockets, the kneepads, the checkered cotton, it’s all totally of key.
The only thing that was good is the fit.
So now I’m busy with something completely different, to quote Monty Pyton. A bleu pant, using the basic lay-out, (for the addicts: nr. 25 from 1/2009) but with everything else different. Adding green and nice pockets on the side, and intending to use a cord in the waist and the legs. 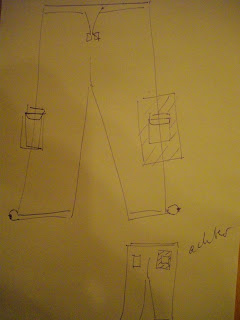 Here’s a sketch off what I have in mind, based on several Ottobre designs. 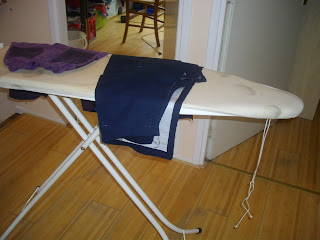 The legs on the ironing board.
Usually I trace the pattern with a double white thread, but for now I used a tailors pencil 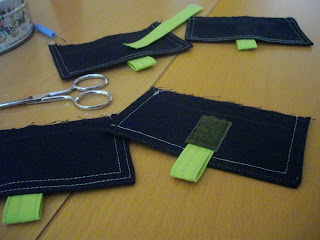 The pocket flaps, made this morning.
I'll be posting more as I go along, I recon this pant will take me several evenings.
And the red pants? I trimmed of all the extras. It’s just two legs now, sleeping in my sewing room, dreaming of a fabulous make-over. Maybe some day I wake them up.
Gepost door Ria op 19:47 Geen opmerkingen: