The Earl of Spencer 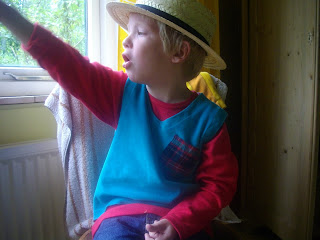 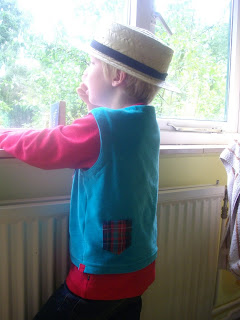 Here’s a spencer (slip-over) I sewed for Pelle a while ago, but never posted about. It’s made from an second-hand womans garment (a tank-top, or something like that), which I bought 2 years ago (I think), at a fair. 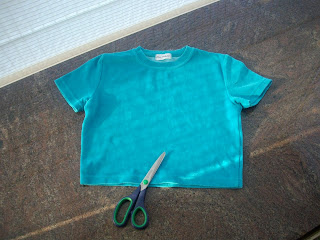 I loved the colour and the soft velour. The pattern (# 18 from Ottobre4-2009) barely fitted, but I was able to keep the bottom seam.
I added 2 pockets for a little zest and lined the arm-holes and V-neck with the same fabric. You can’t see it, fortunately, but the lining wrinkles a bit on the inside, and that bothers me. But since no-one else will notice, I let Pelle wear it. Strange, isn’t it, how such details keep you from being entirely pleased with the garment and wanting him to wear it all the time.
The plaid and the colour also work very well with the green pants I sewed. 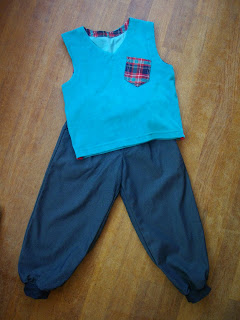 The photos with the hat were taken while we played in his bedroom this afternoon. More about that soon, because I love to tell you how well he’s doing, right now, and how I enjoy being with him, there.
Gepost door Ria op 15:34 1 opmerking:


We had a wonderful holiday, full of bike rides, camping, sun, rain, and joy. When I looked through the kitchen window from the camping in Aalborg, where we started our trip, I realized it was a dream come true. Free as birds, exploring the world on our beloved bicycles, and sharing this with our little man. I think this is the start of a holiday tradition that will only stop if we’re not physically able to do it anymore (and I still feel so strong an healthy. I really think I have even more endurance as 20 years ago. What a bliss!).
The picture is taking on a campground in Attrup, where we had a tasty zucchini-rise dish I made from veggies we bought at a stall along the road. It felt so great to be self-sufficient. Having everything you need with you and it's enough, more than enough to have a wonderful time. Who needs to be rich?
Gepost door Ria op 21:09 4 opmerkingen: 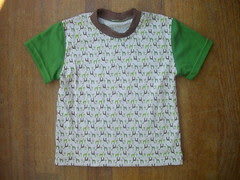 Just a quick post to show the T I made.

I love the fabric with the little giraffes, but was afraid the print would be to busy to make a regular T. But it worked out just fine. The neckline looks a little crooked, but I think it will be fine when Pelle wears it.
It took me a long time to make a good neckline, but now I really think I found my way around it. I don’t use a pattern, but just stretch the fabric around the unfinished neckline to determine the length, fold it double and than sew it on with a little zigzagstitch. To finish it off, I use a twin needle. I prefer to use a ribknit, and I can buy plenty of those in Germany, but for this T I used a regular T-shirt knit, because of the matching brown colour. So it doesn’t take back all the shape when stretched, but still it’s good enough for me.

I made the T to go along with a brown trouser I made earlier. More pick of that one on Flickr. 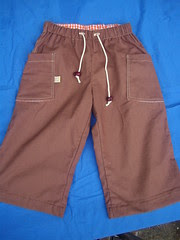 Preparing for the holidays, part 2 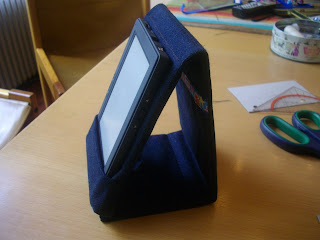 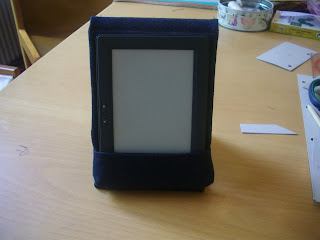 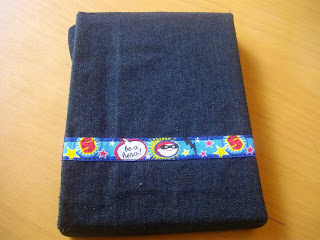 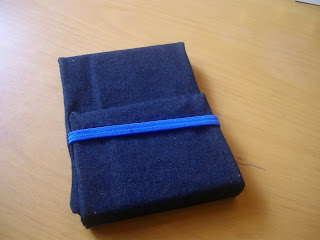 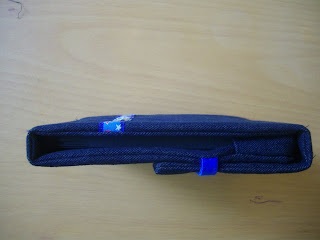 Mark bought himself an e-reader, the other day. It’s especially handy for our holiday. You don’t have to carry around heavy books. As it is being squeezed into our bikebags, I made him a cover, using this tutorial. I adjusted the measurements, as shown at the end. I’m pretty pleased with the result. I used a dark denim from my stash and a ribbon I bought at Farbenmix . The elastic band is a hairband, as suggested in the tutorial. As you can see on the pic, it runs a bit oblique (if that’s the right word), but otherwise, I’m pretty satisfied. The pocket is sewn in an interesting way I’ve never done before. I really hopes he likes it.
Gepost door Ria op 16:42 1 opmerking:

Preparing for the holidays

Next week, we’re going to cycle in Denmark, for two weeks. Before Pelle was born, Mark and I always spent our summerholidays biking. We made wonderful trips to Ireland, England, France, Spain, Greece and even New Zealand, but the most wonderful of all were our rides in Utah and Canada. I was so deeply impressed by the landscape and filled with awe. Our planet is so beautiful. Can you imagine riding on the Icefields Parkway, surrounded by mountains and being part of it all? Because that’s the beauty of cycling. You’re part of it all. Far more so than when you’re in a car. You feel the land in your muscles, climbing and descending, or just peddling around on flat roads, the wind in your face. And it gives you such a taste of freedom.
Until now, Pelle was a bit too young to spend a long time on the saddle, but now we feel it’s time to pick up our old routine. We won’t be making long trips, 40 km. at the most, per day, and want to camp and stay a bit longer at one place if we like it there. 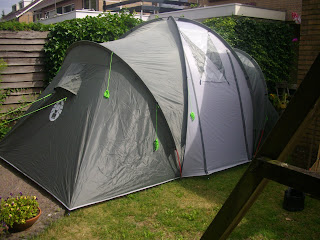 huge tent, but not too heavy 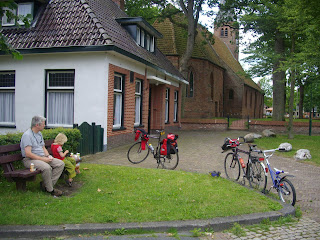 So we’re preparing. We bought a huge tent, borrowed a trolley, and did some test-drives. On the picture you can see Pelles bike attached to mine, so he won't have to ride that much himself.
Since we’re taking along the tent and stuff like sleepingbags, pots, a stove etc., there’s not much space left for clothes. I don’t mind. We’re not up for glamour, but for adventure. Still, a short would be nice to wear if the weather is warm and it’s practical to stuff into the bikebag. Since I didn’t have one anymore, I made one myself. I used a pattern from Ottobre 2/2008, the jogapants, using knit from my stash. (I also used it for PJ's for Pelle). 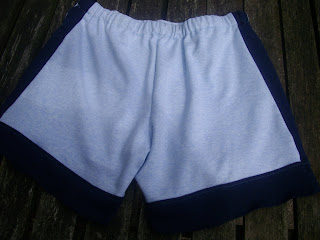 I shortened it too much, so I added a strip of fabric. I also had to do that to the sides, because although I traced size 40, my regular fit, it was a bit to tight. ( I gained some weight the last months. That hasn’t happened to me for the last 25 years).
I’m rather pleased with the outlook. The blue makes it look like a sportpant. So I might use it when I start running, too.
For more preparations this week, stay tuned.
Gepost door Ria op 16:55 2 opmerkingen: