About a boy in the States.

When I started blogging, I had no idea what a wonderful spin-off it would bring me. At the time I was so worried about Pelle and I felt so sad. And than Maria, whom I met because of the wonderful T-shirts she made sent me an e-mail. She found out that her son was autistic and in the same dark weekend upon realizing this, she found a wonderful treatment. I might be interested. And I sure was. It was the turning point for me. There was a way I could encourage Pelle to grow. No limitations, but opportunities. No gloom, but hope. Oh, how I needed hope at that moment. So I started by playing in Pelle’s bedroom and now we have a program running at our home and my boy is thriving.
I will always be thankful for Maria’s e-mail. She made a fabulous video about her son, Joaquin, and their journey with Son-Rise. Look, listen to the wonderful music and enjoy.

Dear baker, thank you very much. 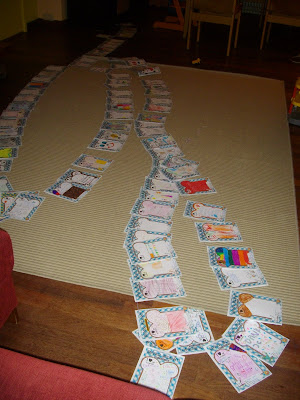 Almost two weeks ago, the children of Pelle’s school had breakfast in their classroom. Sponsored by the trade organization of bakers, the children ate krentenbollen (raisinrolls, picture at the end of this post), bread rolls and regular bread with cheese, sprinkles and applesyrup together with a glass of milk and an egg.
It was very cozy in the classrooms and the children ate a lot!
Since our local baker delivered all the bread the children thanked him by making a nice drawing. As I volunteer a lot at school and participated in the organization of the event the small drawings ended up in our home and Mark and I assembled a bunting line. Yesterday I went to the baker with two toddlers from school and we gave him this present. He said he would hang it in the store and invited us to take a look behind the scenes. There we saw one off the employers busy making chocolateletters (a tradition this time of the year) and further along there were the ovens, still warm from the making of eggcakes. As our own house is not that far away we can often smell the scent of bread being baked, very early in the morning. Delicious.

The drawings below are made by children from 4 till 12 years old. 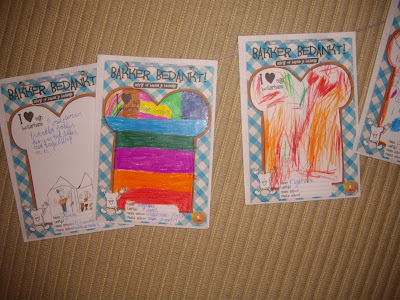 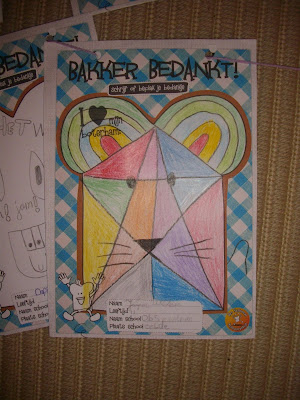 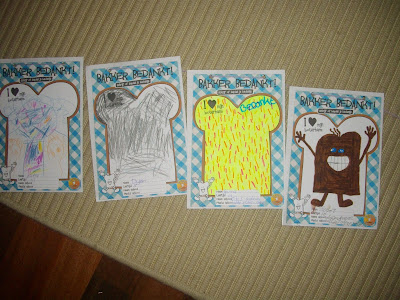 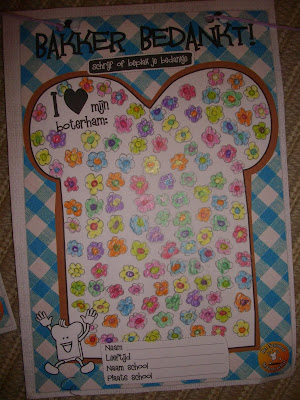 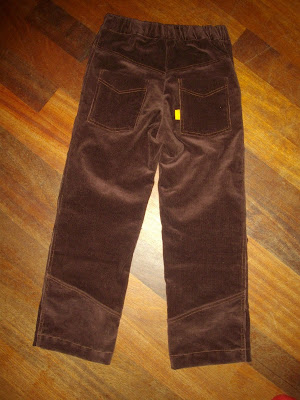 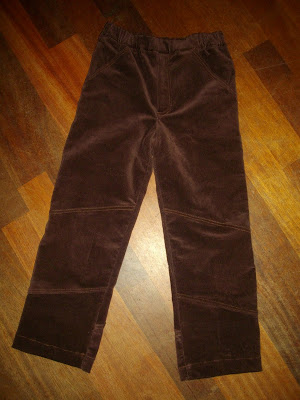 Since the weather is getting colder rapidly, I had to make my boy some warm pants. Until now, I used the regular Ottobre patterns and since they are usually a bit baggy I sized them down a bit. (He is now 122 cm. long and I would have sewn a 116 pattern without the seam allowances). But this time I wanted a straighter fit. Not too tight, as in the latest issue, but nevertheless a bit smaller. And I found it! This one is from the winter issue of 2006 ( # 19) and I like it very, very much. I am definitely going to use this pattern for a long time.
For this probe, I used a thicker stretchy corduroy from my stash. I traced the legs in one piece and cut in into diagonals, based on an Farbenmix pattern I like. I played around with the grain of the fabric. Since Pelle never uses his fly (he just pushes his trousers and underwear down in one move, not even undoing his belt and than wrangles it up again) I made a mock one. Probably my last, because he will not be able to get the pants over his bottom and hips when the fabric is not stretchy.
First thing to do now is make a sweater to go along with this dark brown color. I already have some things in mind (orange, and red, and pinkish. Oh where to begin first?)
Gepost door Ria op 10:09 1 opmerking: 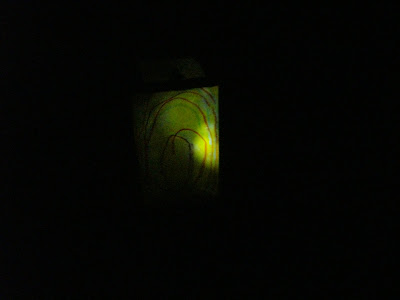 Yesterday it was Saint Martin. Every year at the 11th of November the children go from door to door with the lantern they made. They sing songs about Saint Martin and in return get some candy or fruit.
So every year, Pelle makes a lantern in school, like I used to do when I was a kid. I can recall my brother carving out a sugar beet when he was little, but that tradition is fading. It is always a joy to watch all those kids with there beautiful glowing lanterns and to hear songs about the Saint, who offered half of his coat to a poor, cold beggar.
Last year it rained cats and dogs, and the wind swept those fragile carton light bulbs away, but yesterday it was clear and crisp in the air. Perfect to go along with dad as I opened our own door for the little singers. 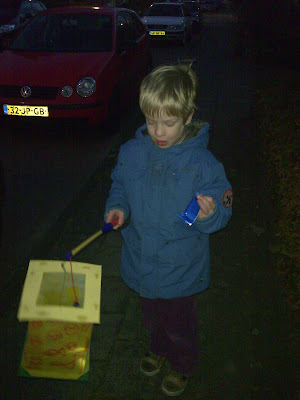 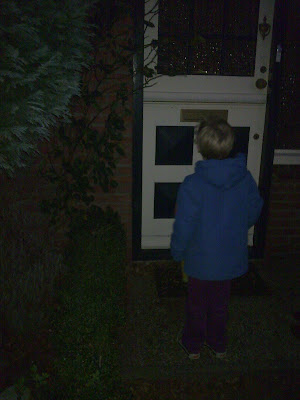 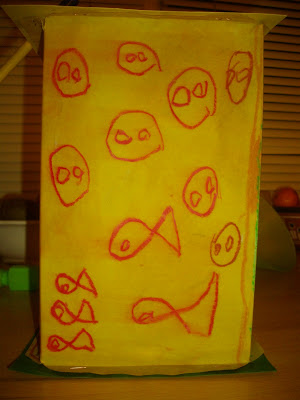 Picking up the thread again 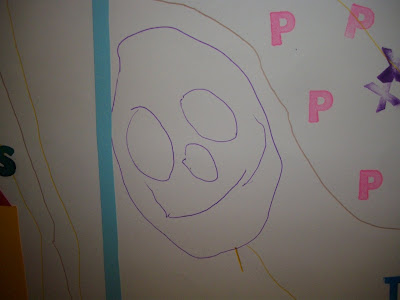 Since I’ve started writing in Dutch so much I’ve neglected this blog way to much. The Duch blog is all about Pelle and the program we’ve set up for him. My aim is to make SonRise more familiar in Holland.
Now the intensity of creating the program is wearing of there’s more place here for my sewing and the world outside me being the parent of a special boy. I’m intending to post one blogmessage here every Thursday, in line with the way I started. Talking about my everyday life and the things I create.
But I feel I have to start with an update about my boy. He is learning to read and starting to do sums. Here in Holland, you start school when you’re 4 years old, in group 1. Now Pelle’s attending group 3 already. Academically, he’s doing fine, but he has a hard time concentrating and writing, since his attention span and fine motor skills are still not that advanced, yet. He also does not engage much with the other children in his class. But I’m optimistic, very optimistic. Because he is responding to the SonRise program so well. I play twice a week with him upstairs and every Tuesday there’s a wonderful woman called Lila who comes over. She has lots of experience with autistic children and was drawn to the philosophy of unconditional love when she read the book about Raun Kaufman. She’s also a Buddhist, like Mark, my husband. I think the Buddhist lifestyle and the concept of loving your child no matter what go very well together. Every Friday Tamara is coming over. She helped out with the toddlers at school last year and has finished her education. They do a lot of crafting together and unlike last year, Pelle is enjoying it very much. We’re now enticing him to draw and after a lot of scribbles and spirals there are forms arising on paper. You can see them on the pictures I made. I love, love, love it. Our other goals at the moment are to stimulate him to do pretend play and to play a simple board game. And he’s really growing it those arias. 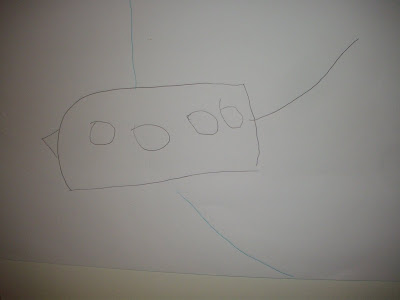 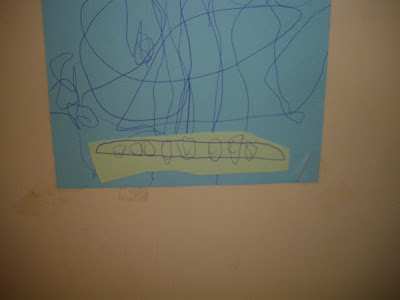 train (Since he also likes automobiles I guess he will love the movie when he's older).

But the biggest changes since we started are his communication skills. I can talk with him just like a boy his age. I can reason with him. We understand each other. And we have so much fun.

This was recorded during the hollidays, 2 weeks ago. He's doing silly walks. At the end he's saying "And now the small film has ended. Can I have a look?".

I’m so proud of him. About the way he stretches his world. It is so apparent when I see him in the pool. Every week he has swimming lessons and every week he dares just a bit more. He jumps in and puts his face in the water now. He can float on his back without support. Every week he does just a bit more of the things he that scared him in the beginning.
I see him grow before my eyes. And what happens physically also happens mentally. He takes his own steps and every time he is going a bit further. I love him so much for this bravery. And for his sweetness and innocence. For the way he is. And I am so thankful of finding a way to stimulate and motivate him to explore his world. Which has become our world. There’s no autistic separation there, anymore. And that is a great, great gift.
Gepost door Ria op 10:47 2 opmerkingen: