A weekly picture, made by my boy. (Often without me noticing him doing it). 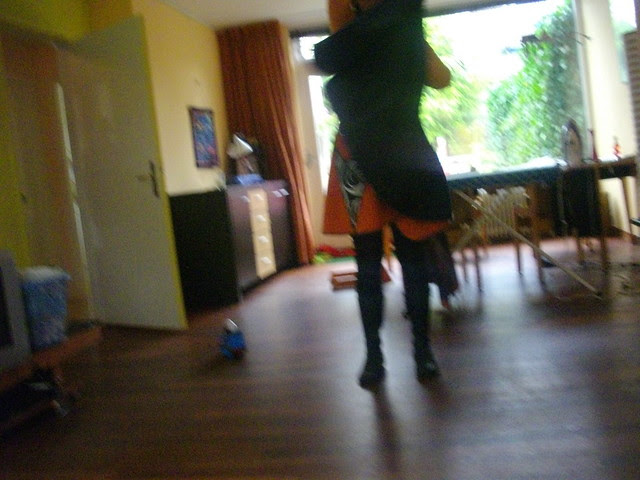 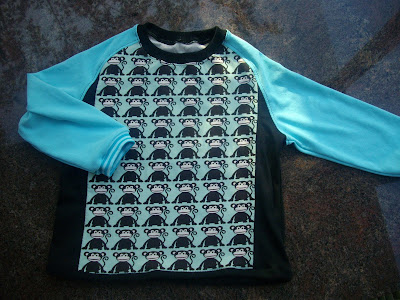 I made yet another T-shirt from the fabric I ordered in Denmark. As I was concerned that using all the fabric would make the T too busy, I decided to go for a raglan cut, and I also added some black knit along the front and back.
I also used a black trim at the yoke, because I wanted to avoid seeing stitches in the pattern of the fabric (and decapitating the monkeys, so to say). I am very pleased with the result. Despite the black, it’s fresh and despite all those rows of monkeys it’s not to childish. 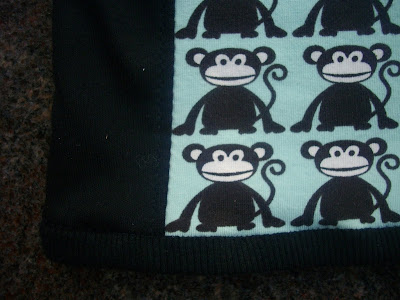 I would love to make 2 more shirts and try the T-shirt pattern of the last issue of Ottobre, because I think I have an excellent fabric match for that one.
We'll see.
Gepost door Ria op 16:48 4 opmerkingen:

Pelle's drawing skills are emerging! I could hardly believe my eyes when he came home today with a drawing of a lion he made at school. It's a little hard to photograph, but I hope you can see the figure. 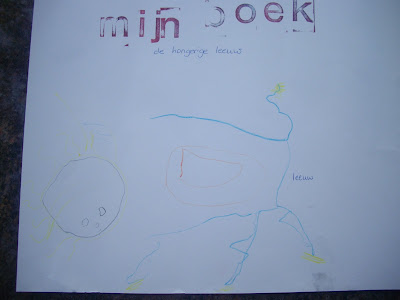 It also reminds me of the drawings in the cave of Lascaux. 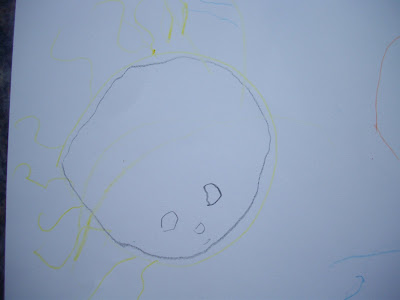 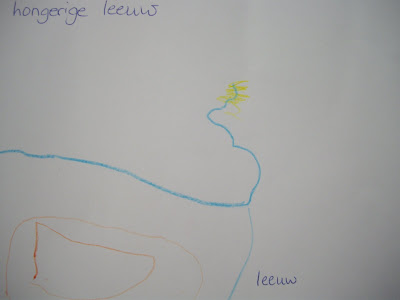 Last week it was ‘kinderboekenweek’ (children’s book week)), which is a national week organized every year to promote these books. At school, the pupils of grade 8 came to read for the children in grades 1 and 2 (4-5 years old) and every child had to bring his favorite book along. Pelle choose “The hungry lion”, which tells the story of Singham, a lazy lion searching for food. 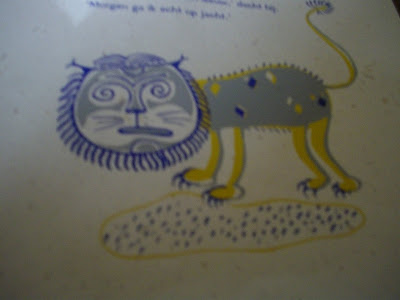 (here he is in the book)

Apparently, the children had to draw their favorite character and look what my boy did!
I was so pleased to see it.

A couple of weeks ago, when we had a party at school, all the children where invited to add their part to a large painting. And then he did his first figurative work: two small stripes forming a cross. “It’s a mill”, he said. (Your either Dutch, or you aren’t).
Last week, he came home with another drawing and for the first time I saw figures: a spiral, a rectangle, a triangle, some waves.
This already was so different from all the scratches he made before. 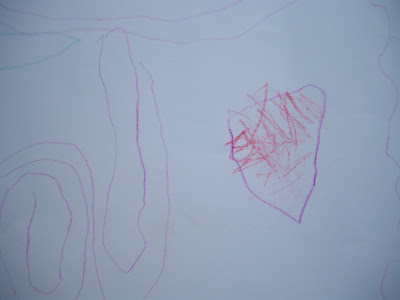 A weekly picture taken by my boy 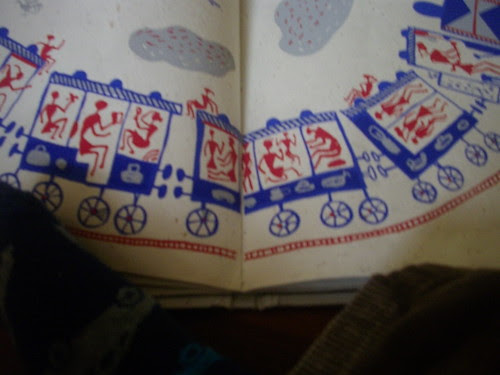 Labels: As Pelle sees it, Pelle

I recently bought some wonderful fabrics and am busy making T-shirts for Pelle.
I finished a stripy orange one, which unfortunately turned out a little tight. He can wear it as an undergarment, but that was not my intention. Luckily I still have a lot of fabric left, so I can make him a real nice summerversion in spring, because I so love those colourtones. 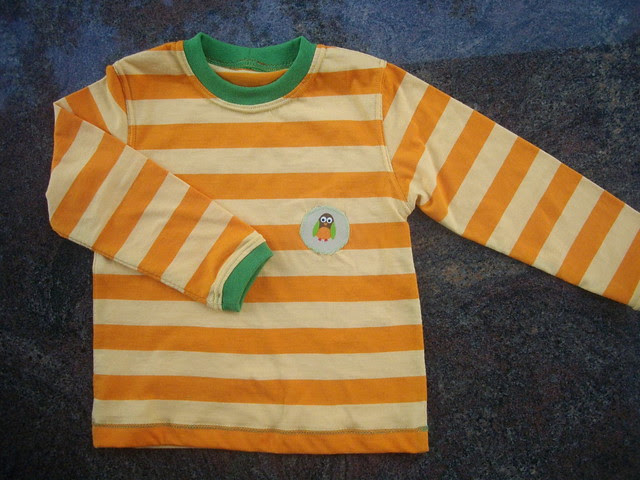 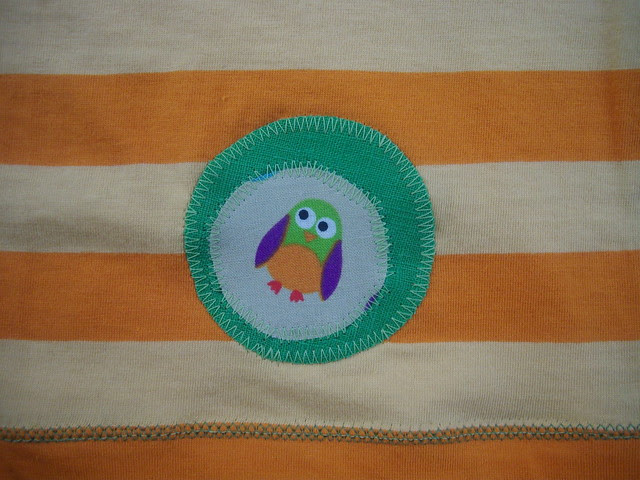 I made this patch on the back, from 2 different cottons.

This T is a little thicker and wider (still size 110, but with seamallowances this time) and will be comfy now and still wearable a few month from now, I hope. 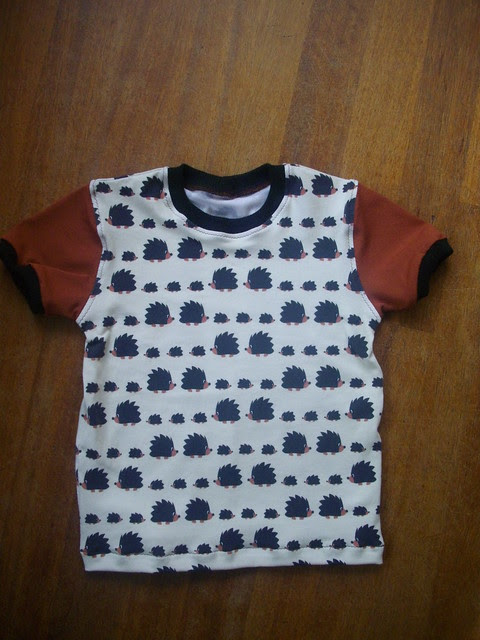 Finally, I'm getting a bit faster in sewing these T's. They still take me 4-5 hours, but I really like playing around with shapes and colours. The black trim from the hedgehog T is from an old ribknit T from Mark and it gives me such a pleasure to combine it with other fabrics into a whole new look.

Next up is a longsleeve raglan from monkey fabric. I hope to show you that one at the end of this week.
Gepost door Ria op 21:49 4 opmerkingen:

A weekly picture, taken by my boy. 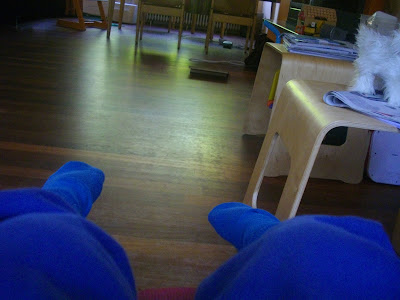 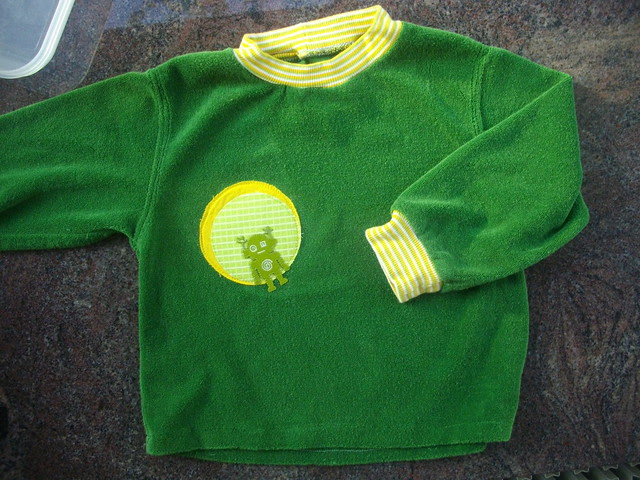 I made Pelle another sweater. This is from a lovely green soft terry knit I bought in Germany (through internet ), at Micha's Stoffecke (the fabriccorner of Micha, although 'corner' is an understatement, because they have a huge supply).
After I finished, I made an applique, but didn't like that one. So I removed it, but than there was some glue left on the shirt (I used Vlieso-fix, a European version of the paper-and-adhesive iron-on stuff). So I had to come up with another idea. Hence the robot on some cotton scraps . Next time, I just make a plain shirt. He doesn't have to wear embellishments all the time. 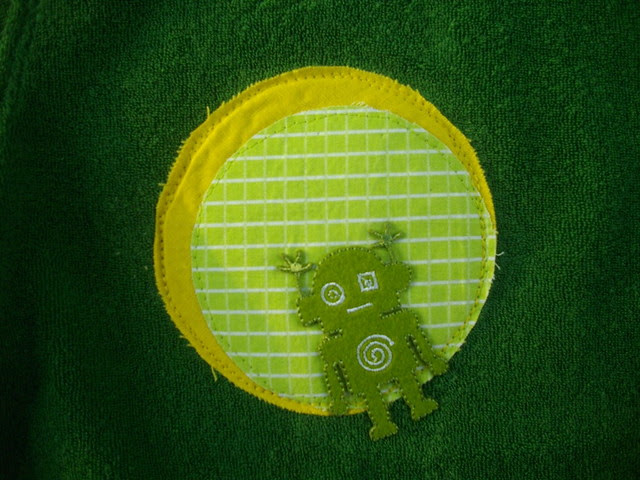 This little robot is an iron-on gadget I bought in Denmark (through the internet), at Stof og Stil (Fabric and Style). They have some really nice fabrics as well.
Gepost door Ria op 12:57 1 opmerking:

A weekly picture, made by my boy. 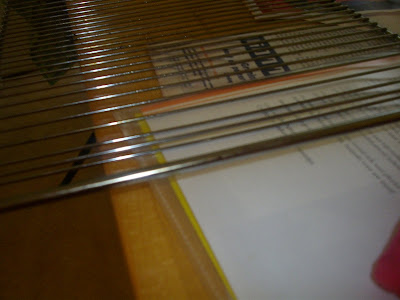 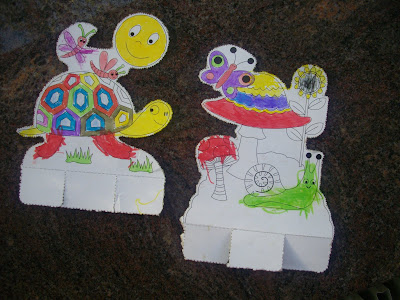 This is what we did yesterday. Coloring. A first. Of course Pelle does a lot of painting and coloring at school, but until now, he didn’t do this at home. But recently, he likes to do a thing we call “prikken”. It’s something I don’t know the English word for, but you can see it on the picture, where he’s making holes in the carton, using a sharp pen. 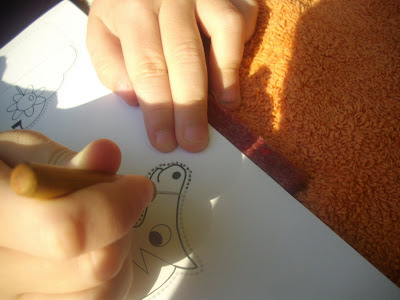 He’s really good at it, pinching hole after hole and being focused.
Since the images are white, I suggested coloring them, yesterday. So there we were, on the bench, working together. It’s still a bit hard for him, because of his grip (using his fists more often than his fingers) but I was so glad, suggesting colours and doing the parts he didn’t want to do. A real co-production!

It’s just an example of the huge changes he is going through. Becoming far more active. Doing things in stead of talking all the time and asking the same questions over and over again. He almost lost that repetitious behavior. And if he does come up with his favorite topics I really concentrate and sincerely answer him, knowing he needs it to digest his imput.

Here you can see him backing bread, 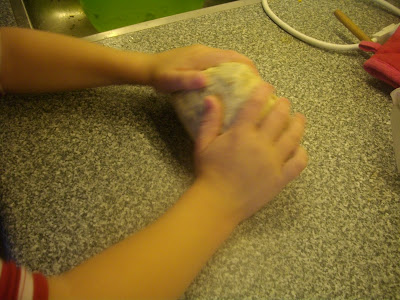 Keen on wearing those mittens 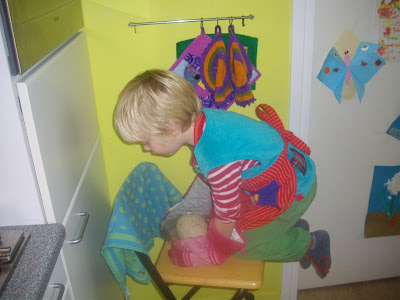 He announced that from now on, he wants to help in the kitchen every day. It slows down my cooking, but oh boy, how I love to give him instructions and enjoy his company.
This morning he said: “Do you know why I want to make the croissants? Because I like to roll them”. So I suggested using clay (we can only eat that much, can we). Also something we didn’t do in a long, long time, because Pelle only wanted to eat it, last year (asking me to make him an icecream). I’m looking forward to do it more often. 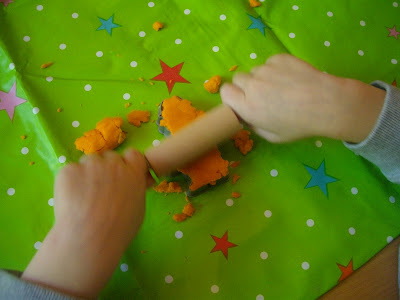 In the meantime he has mastered a skill from a whole different kind. He can see the time on a clock. It doesn’t even have to have numbers on it. Now is this the boy with an IQ of 65, as they said last year? I really don’t believe those values anymore.
Gepost door Ria op 12:19 1 opmerking: