Time flies, even if your busy 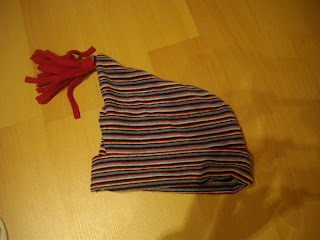 Remember the hat I made for Pelle? It’s a favorite of one of the teachers at school. And I wanted to make something else to go along with it. 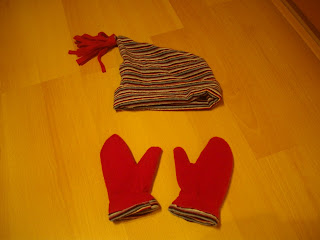 So here the are: mittens.
And something more to go along.
So I present 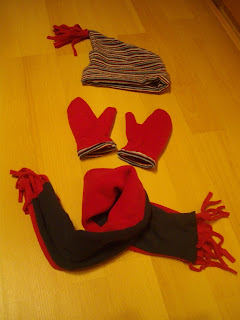 A scarf.
The frills of the scarf match the tassels of the hat.
The colour of the lining is blue, but I have no better light at the moment. 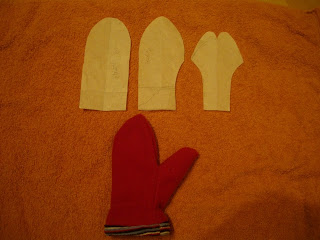 Oh my, these took me sooo long to make. I started yesterday with one.
This morning it appeared to be to large. And then I made an easier design, just drawing around Pelle's hand, but they didn’t fit either. The thumb was to small and high up. So I decided to adjust yesterday's mitten by taking out the lining and the elastic band, making it smaller and fitting in a new band again. Still to big around the wrist. Made the elastic band smaller.
But now they’re finished. The construction is a bit unusual, if I do say so myself. It’s a separate thumppiece, I drew according to the store bought mittens he has. So there’s no seam running across the thumb and he has a bit more room for movements.
The good thing is that after all the corrections, I now have a pattern I can use again and again - I hope- just adding some millimeters each time.
Tomorrow it’s on to making some bibs. Which again take me far more time than I anticipated. When will I ever become fast? Aren’t all the other woman fast? I envision them with their machines running mad and throwing garment after garment high up in the air, singing happily.
Gepost door Ria op 22:08