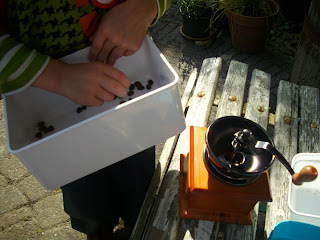 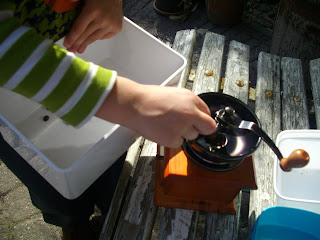 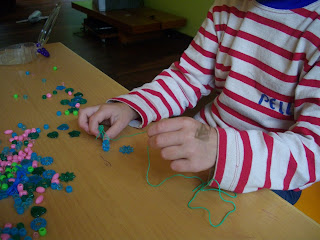 Ever since I’ve been reading blogs (and I think that’s about 5 years now), I’ve been a fan of SouleMama. I’m not reading her tales everyday anymore, but every once and a while I hop over there for a doses of tender family life, love and care. I love the things she makes and the connections she makes with the world.
Her blog is also her way to cherish the good moments of life. To be mindful. And I think especially in her photo’s she makes these marks. Their like pearls in the continuing chain of everyday.
So, inspired by her, and to celebrate my boy, I’m going to publish more photos of him in action. So I won’t forget this precious time of his childhood.
Gepost door Ria op 23:42 Geen opmerkingen: 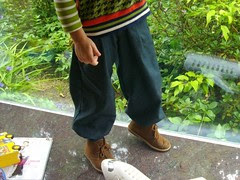 green pants
Originally uploaded by oddwise
I made these some weeks ago, but only recently changed them by adding 2 cuffs on the ankles, just like the blue ones I made before.
I didn't want to do that first, but changed my mind because with a regular hem they were to wide and flappy. The fabric is a thin strechy cotton, perfect for this not-to-summery-weather.
Gepost door Ria op 15:59 Geen opmerkingen:

Throwing away the curtain 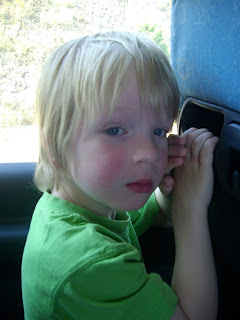 You know how I’ve struggled with my special boy and him being different. When he was diagnosed as being autistic it felt like an incurable illness we just had to life with. I felt that the only option for me was to accept it and let go off my dreams. And although I tried to see things in a greater perspective, my feelings couldn’t. I felt lost. Deprived of a future where my boy could thrive and blossom. Where people would recognize his beautiful soul. And I also questioned the diagnose. Is Pelle really autistic? Is he on the spectrum somewhere? Sure he is not behaving like most of the children his age. But as I tried to pinpoint al those signs that are supposed to be typical indicators, I felt them slipping away. I tried so hard to search for ‘evidence’, that I lost my view on Pelle as the boy he is. So his diagnose really stood in the way. In the way of accepting him with all my heart, in the way of being unbiased and really open to everything he brings.


So that’s what a stigma does, even to a mother. It’s like a curtain. I was very busy trying to determine what the curtain looked like. I lost Pelle behind it.

But I am a lucky woman. Because of this blog, Maria contacted me. And told me about the Son-Rise program. Ironically, I have read this book about and autistic boy and the way his family embraced him and worked out a way to heal him many years ago, when I was a student. I have a very vivid memory of it. But I never made the connection with Raun, the boy in the book, and Pelle. Maria had to make it for me. Their message? Enter your child's world, and when he's ready, go play and show him the way out. You can help your child. Through real acceptance. By following and than leading.
And that’s another irony. Because in my profession, that’s also the key, if you want people to learn. First stand beside them and then show them alternative behavior. And always start with their own motivation, not with yours.

So I’ve thrown away the curtain. Because that was not helpful at all. Nor for me. And now I can see my kid again. And feel this joy arising in playing with Pelle and helping him coming into our world. And I really feel he’s growing so much, lately. Little by little, he is starting to interact with other kids. Holding hands with a girl on the playfield. Wanting to share his interest with gran, his biggest fan. Concentrating more and fantasizing more.
Maybe his brain is different from most kids. I now think that could be an advantage.
I heart what another father of an autistic boy, Rupert Isaacson, said. He and his wife also made an amazing journey to seek aid for their boy, Rowan. He wrote (in a more nuanced way that my summarization) that doesn’t even want to Rupert to be cured, as long as he has the ability to connect with our world.
And that’s my wish for Pelle, too. Being able to be himself, and have the social skills to interact with others. Because there’s so much love out there, for him. And I want to show him the way. Thanks to all the great instructions on the website of Sonrise, I now feel I have the tools in hand.
Gepost door Ria op 13:19 1 opmerking: