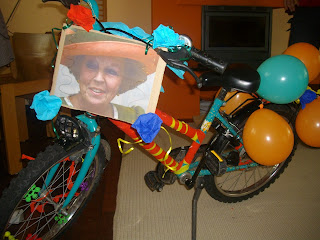 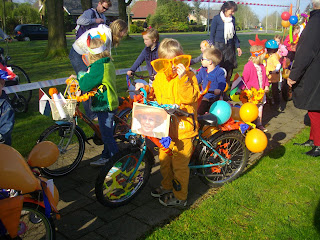 It's queensday today. We celebrate the birthday of our former queen. There will be a market, where children sell their second-hand toys but earlier on this morning the kids biked around a small pond with their special bikes. It will be sunny todya and festive.
Gepost door Ria op 09:50 Geen opmerkingen: 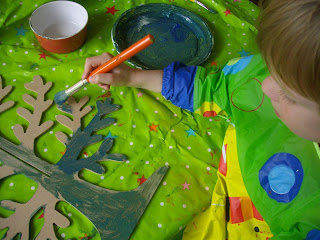 Two weeks ago, Mark and I had a meeting with our Dutch SonRise team: Lila, Tamara and Hella (who doesn't play with Pelle but is our counselor). Pelle is doing great. He progressed on all of the 3 goals we set out for him, over half a year ago. Those goals were:
- learning to draw
- learning to play a game together
- learning to encage in pretend play.


We have seen little puppets arise, a plane, towers and numerous spirals. Pelle can play a simple board game now, and is able to take turns. He can also take on a role, pretending to be an animal or a figure from a favorite book. It’s not very elaborate, but the seeds we sowed are beginning to sprout.


And moreover, I admire him when I see the he is not only learning a lot at home but in the meantime also a lot of new skills in school. He’s starting to read rather well, I think. As for the math, I don’t exactly know it, because he doesn’t do this at home. His writing has also improved much, although it is still very large compared to his classmates. But it’s the progress he makes, that I enjoy, not the end result. And what’s also very apparent is that he’s a lot calmer. He’s able to concentrate, listen and focus far better that he ever has.


He is also moving more fluently. I saw a photo the other day where he’s painting in the garden, half a year ago. He’s holding his hands in a typical manner and I realized he’s not doing that anymore. He’s even starting to practice cartwheels everywhere he can.


We decided to introduce a new goal, learning to play alone (without a computer or electronic device). That means he has to postpone his need for attention from me or someone else. And what we see so far, by introducing 10 minutes of silent play while the other person is present but reading a book or doing something different, it is working out very fine. I think this is a goal we will achieve very soon. We go on with drawing, painting, introducing him to different materials and celebrating the love of being busy with it, not focusing on the fact that is has to resemble anything (as we suspect his inability to do so is holding him back). We go on with games and pretend play.


And with a bit of luck, we will be able to contract another player (our third!) as we probably will be getting a bit more money from youth aid to take care of him. Fingers crossed.

I sewed Pelle some pants, lately. This one is the latest. I used an Ottobre pattern for skinnier boys and cut the legs into triangles. I worked out very well. The fabric is a blue/purple not so thick strech denim. I used pockets from another Ottobre model. 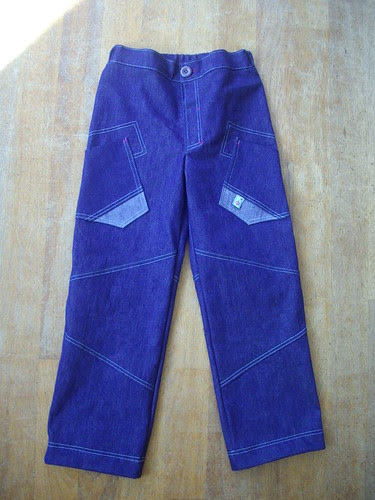 I think it's ideal for the upcoming spring.
I made a semi-fake fly (no zipper, buttoned waistband) using the instructions from a Make-it-Perfect Big High Flyers pattern, which I'm going to use more often, because it's a great construction. 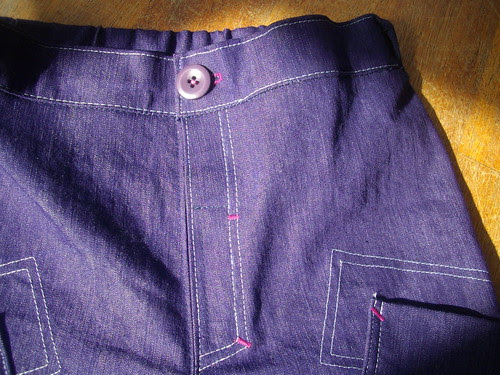 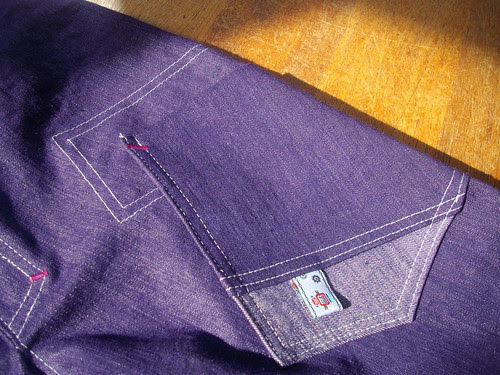 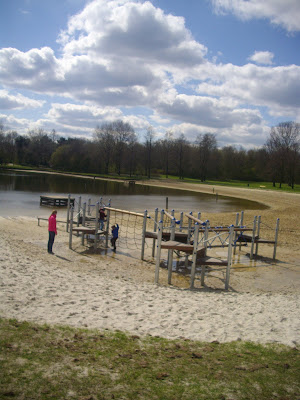 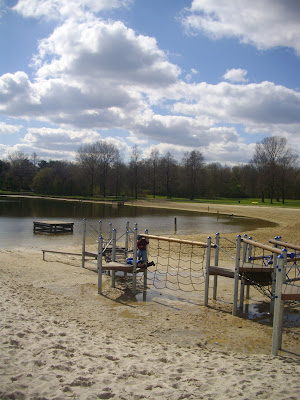 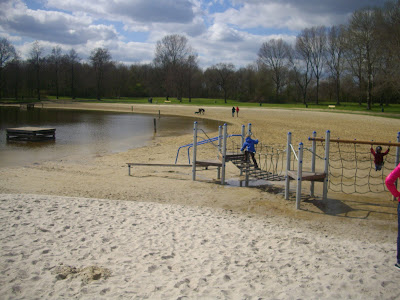 I am reading an inspiring book about the upbringing of children, called If the Buddha had kids by Charlotte Kasl. I can’t begin to sum up everything she says, about being respectful, encountering your child as it is (also the core of the SonRise program), not wanting to change your child into somebody he is not, how to treat your child’s behavior and approach his emotions, and so much more. She also emphasizes the importance of playing outside and connecting with nature.
I so agree with her. As a kid, I roamed the fields around our house, played in the grounds of my parents business, in the grass in our garden and that of my grandparents. I still love to be in the
woods and find comfort there.
My boy loves to be outside, too. Oh boy, we walk in the forests a lot. Nowadays he’s more into playing in the schoolyards with our team members from the Dutch SonRise, climbing, lending
skateboards and skelters, running.
Above are picture of him near our lake, this Easter. The municipality put up al kinds of new climbing constructions and it was so much fun to see him enjoying himself.
Gepost door Ria op 21:27 1 opmerking:

Getting ready for Eastern. 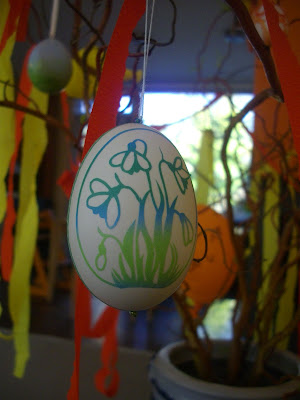 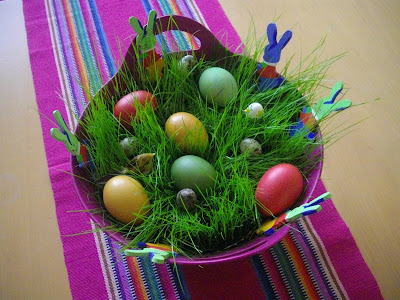 This week, we decorated the house for the upcoming feast.
Today Pelle and I dyed some eggs and put them in the basket with the grass I sowed almost two weeks ago (an idea from the net). The little hares are made by my mother, when I was a child. 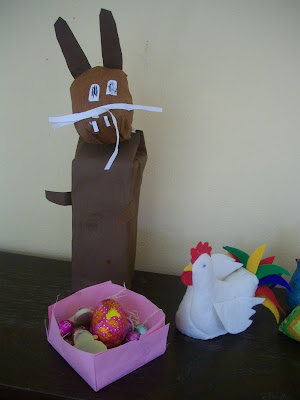 Pelle made the hare at school. The felt chicken was a gift.

I told Pelle why we celebrate Eastern and what it means to us. I find it important for him to learn about religion and spirituality. To let him know that we all live in one world and that love for one another is the key to an abundant life. And that there is so much wisdom speaking from the teachings of Jesus, Buddha, and so many, many others. That true value surpasses the material world. I trie to live it to him and hope it will resonate in his life.
Gepost door Ria op 20:59 Geen opmerkingen: 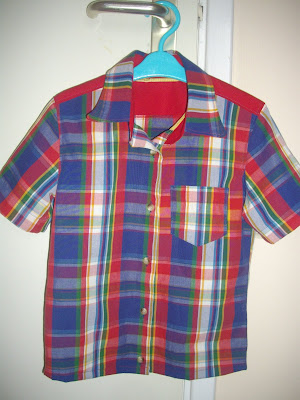 Two weeks ago, I picked up a checkered
shirt in the thrift shop. An adult size (42, I think), in good condition, for 2
euro. I changed it into a shirt for the boy, size 122. 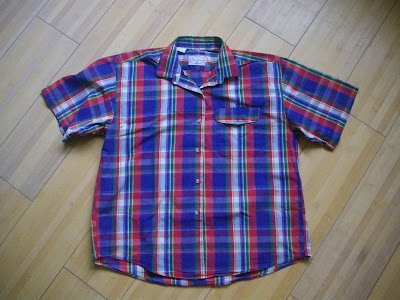 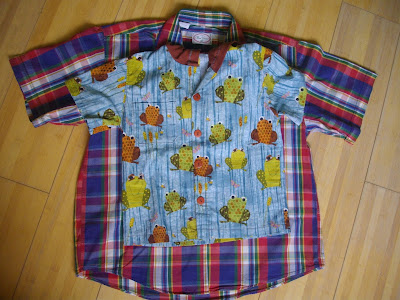 with a size 116 shirt I made earlier.

Since I saw so many gorgeous Apple shirts (from
the summer 2010 issue of Ottobre) passing by on the internet, I wanted to try the
pattern myself. I made an alteration to the collar, following her instructions. 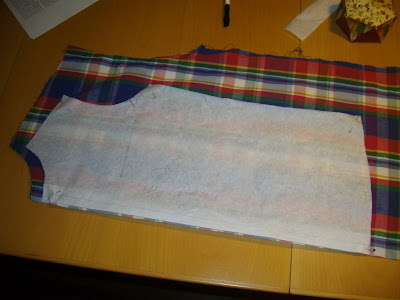 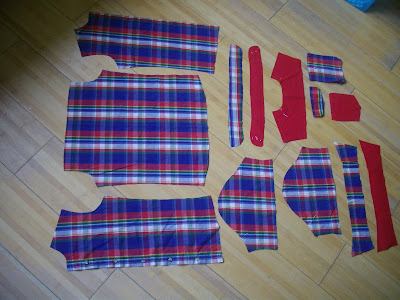 I had to add a piece of red cotton, to make things fit.

As the red cotton was heavier than the checkered, I decided to make the back yoke out of single fabric and add a neck binding in stead. For the collar, I followed instructions from a booklet. 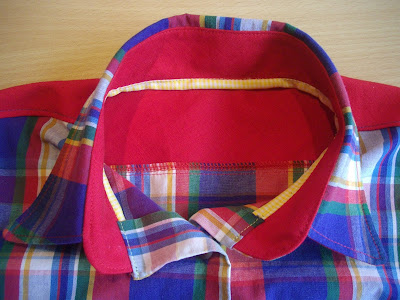 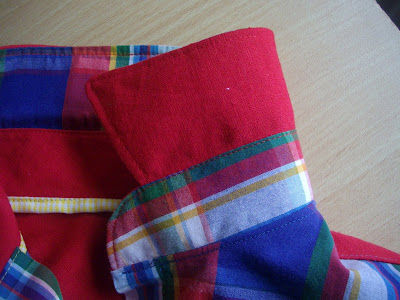 Playing around with the fabric.

As I was not content with the length and the drape of the sleeves, I sewed a blind hem into them, as done in the screwdriver shirt from the 3/2011 magazine. 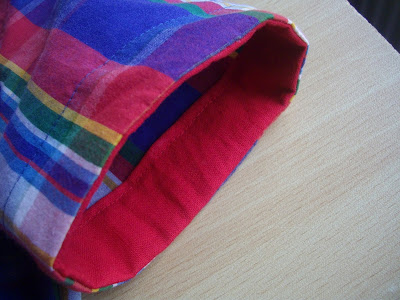 I am very pleased with the result. The finish is great, and the red gives the shirt a nice sturdiness. In an ideal world, I would changes the buttons for colored ones, but then the sport of the shirt being cheap is gone, so I leave it as it is. 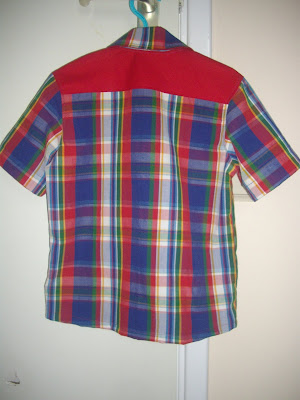 I bought a second-hand bright green T for 1,50 euro which matches it just fine. And so I concur the crises :-)
Gepost door Ria op 09:37 2 opmerkingen: