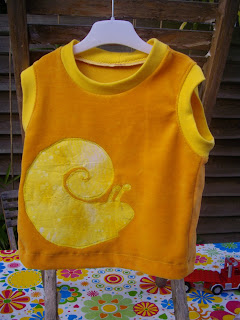 I thought it was a nice idea to sew a slip-over for Pelle (at least that's how we call it here in the Netherlands). Something I can easily fit over a T-shirt, when the wheather is warmer but not to hot. So I selected a pattern in one of the Ottobre magazines (4-2005, # 6) and started sewing, the last weekend. I also incorporated one of the Little Fish caracters. As I was fitting the slipover onto Pelle it turned out way to small. So I had to change everthing. Bah! I widened the side by sewing in two yellow strokes of 4 cm. each, deepened the armpits (had to remove the yellow binding) and the neck. So it took me so much longer to finish. I wouldn't have gone to so much effort if not for the snail, wich turned out so good and immediately spoke to Pelle. So here we are. 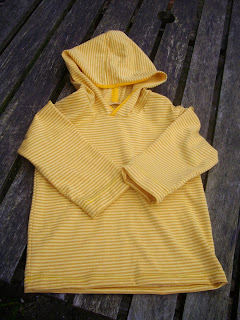 Accompanied by a stripy T-shirt with a hood. I had to play with a T-shirt pattern from Ottobre, because in the issues I have, there's no ready to make hooded T. So I had to experiment and redo the neck, because my first try was to small (or Pelle's head to big). But now it all fits and I have 2 adjusted patterns I can use for some time, I hope. 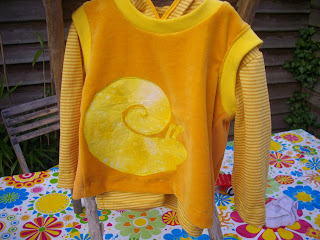 I'm also expirimenting with a different camera, but have not quite come to grips with it. I still think my pictures should be sharper. Will keep trying.

This one is rather nice, I think. He's wearing the blue pants I made him some time ago. I still think they're missing a few pockets, but alla. 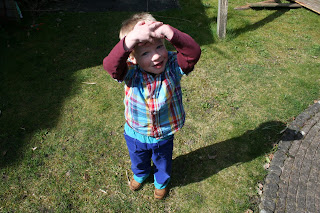