After the summer holidays, the serious work has begun: Pelle is learning to read, write and calculate. He's still in the school he started out when he was a toddler, but has a different teacher. And although she has more than 40 years of experience, she told us that Pelle is the first autistic kid she has in her class. In former years, he would have gone to a special education institution, but now policies are changed here in the Netherlands and the aim is to let kids with special needs stay in school in there own community, for as long as it’s possible.
She told me she seriously had her doubts, those first weeks. Pelle was so overactive, she didn’t now how to handle him. She quickly called in aid and a woman of the special education organization came and observed him a few times in the classroom. She gave his teacher advice, like working with a time-timer to help him concentrate and letting him go if things become to overwhelming, like raking leaves in courtyard. (I myself had my doubts, especcialy on the time-timer, because it's not focussing on his intrinsic motivation. But as it seems to be off real support for him I changed my mind). And now his teacher is very enthusiastic. “It’s a difference between night and day”, she told us a few weeks ago. She feels empowered now and her efforts are effective: Pelle's concentration is improving and he is more able to do an assignment now. And as he likes to learn, she feels she can let go if he needs time on his own. I’m so glad she dared to ask for help and respect her a lot for that. And besides that, she’s very nice and warm to the children and loves to hug them and give them affection.

Pelle's really enjoying school. Every day, he tells me if they have learned a new word, and if so, what it is. Of course he’s a strange duck in the class, but his classmates don’t make a problem out of that. They are used to him and tell new classmates that he’s a bit different. The teacher told me that last week it was his turn to read the words on the digital board and he was so fast, the other children spontaniously applauded for him. He has a ‘personal assistant’, a girl who is doing this third grade for the second year and she’s so very lovely and supportive. She helps him to organize his table and pick up the stuff he needs. He started out with special booklets for processing the language, where the pictures and instructions are very clear. But as he is doing so well, he’s now entering the mainstream method. 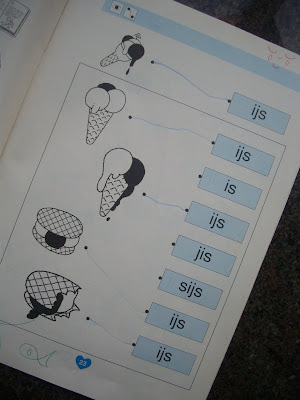 Easier and early version for processing: connecting the picture to the word. Looking for the right spelling of the word icecream. 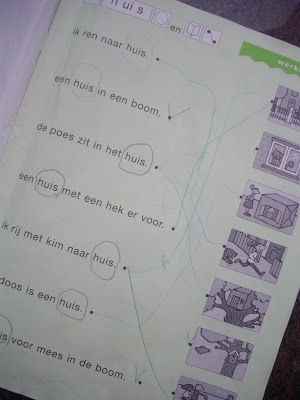 More complicated (mainstream and later on in the curriculum): encircling the word 'huis' (= home) ánd connecting sentences to drawings 'een huis met een hek ervoor' means 'a home with a fence in front'. 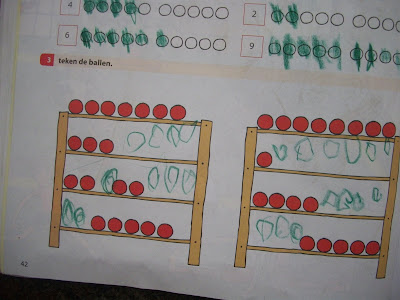 Calculating (math). It says: 'draw the balls'. You can see he has a hard time drawing and his fine motorskills need some more practice.
The remedial teacher found out a great way to motivate him: he's allowed to draw on the digital board in front of the classroom and he loves it!

Now a new goal in our Dutch Son-Rise program is arising, and that’s to learn Pelle how to interact with other children, because he hardly does that. In January we are going to work out a plan for that, like inviting playmates. I’m very optimistic. It will be another step and I’m looking forward to a new dimension in our program. But for now, the holidays are on our doorstep and we are up for a special birthday and Christmastime. I look forward to that.