About presents and playing 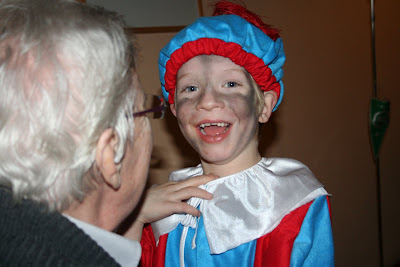 Last Monday we celebrated Sinterklaas and it was cozy. My mother came, my mother-in-law and an aunt of Mark. So here we were: 4 woman, 1 man and a child sitting together, unwrapping presents and reading rhymes. Afterwards we had diner together, to top it of. It was an old-fashion family experience and it felt good.

It used to be hard to select presents for Pelle, because he hardly played with toys, except for cars, trains and busses. I think the biggest challenge for him and us is not communication. We always had good eye-contact and although he learned to speak a little late, it came reasonably fluently. I even think Pelle has a natural feeling for language. Since he learned to speak he asked a lot of questions and was very repetitious. He could ask “Is the door of the mill open or closed?” twenty or even forty times a day. As I, thanks to Son-Rise, though he needed this in some way I could deal with it and take his questions seriously. And it has faded away; we now really, truly have interactive communication. He has opened up.
He’s now at school learning to read and he loves it. I’m glad. Finally, there’s an aria in which he can come along with his classmates and I think that’s very good for his self-esteem.
But playing with his classmates is still something he’s not able to do, yet.
This last year, in our Dutch equivalent of the SonRise-program the players and I focused on enticing him to do pretend-play. We played roles, introduced puppets, imitated animals and did all kinds of other things. I also read a lot of books to him. And now our efforts are paying of. He’s starting to fantasize! In a small way, like a Sinterklaaspuppet he placed in a hoop and saying: “Sinterklaas is imprisoned now” and in a larger way: last week he was pretending there was a lion in the bookstore who wanted to eat us. We escaped on our bike and the lion was hit by a car. But then someone kissed him alive again (the echo of the tale of Snow-white I read him) and we had to escape again by climbing up the largest tower in the land. I was elated and think this growing ability will help him to interact with children more easily.
I also recon next year will be fun to give him toys, because they will speak to him much more.
For now, he had some books, a puzzle to make into a highway, a game with cards where he has to imitate actions and animals and this bag I made him. The fabric says: "Be A Hero" and I ordered it long ago at Spoonflower, I think. As you can see he already used it, because it's stained and will go in the laundry now. 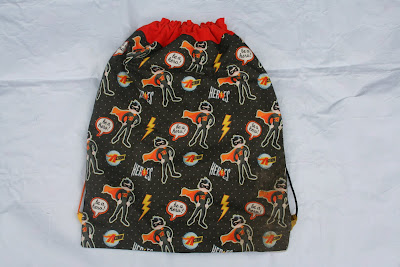 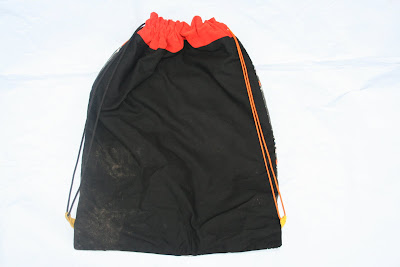 When he’s older, I enlarge the straps. Now the corners curl up, but otherwise the bag would hang on his bum, and I don’t like that. So there’s room to grow for my hero!
Gepost door Ria op 12:22